Now the team at KRCS Hull have spent some quality time with the new iPad Pro 9.7”, they’ve had plenty of opportunity to get hands-on with it, as well as hearing feedback from their customers who’ve used it in the wild. It’s already finding it’s place in Apple’s ecosystem, and here are a few of the benefits they're hearing time and time again.

With the new iPad Pro and it’s unique new accessories like the Apple Smart Keyboard and Apple Pencil, Apple have pushed the iPad even closer towards being a capable laptop replacement. It is now even easier for you to carry out your day-to-day tasks, like creating and working on Office Documents.

We’re asked every day, “what sets the new iPad Pro aside from the iPad Air 2?”, and the answer is easy; everything!

Side by side, the display quality of the iPad Pro 9.7” is stunning, with colours looking richer, and contrast between light and dark being even more visible. Side-by-side with the iPad Air 2, the difference made by the new display and True Tone technology is clear to see. The speakers are another massive improvement. Not only do they sound louder and richer, but the stereo spread you get holding the iPad in landscape is amazing. These two things alone are going to make things like watching Netflix, listening to Apple Music, reading web pages and viewing photos so much better to look at and listen to.

Here are a few of the best features that we think the new iPad Pro has to offer, based on the  feedback we’re hearing from our customers who already love them!

Finally, the Apple Pencil is compatible with a smaller form-factor. Apple place a lot of emphasis on design and illustration when it comes to Apple Pencil, but we’re hearing from our customers that they’re enjoying it just as much for handwriting and navigating the interface of their new device.

For note taking on the go, combining the iPad Pro 9.7” with Apple Pencil can’t be beat. The iPad will basically ignore your palm resting on the screen, helping allow for a more natural pen-on-paper feeling. A lot was said for the accuracy of Apple Pencil in Apple’s keynote, but it’s striking to see for real, unlike any stylus we’ve seen before.

For more information the Apple Pencil we have a great video showcasing the set up and use on an iPad Pro on the KRCS blog. 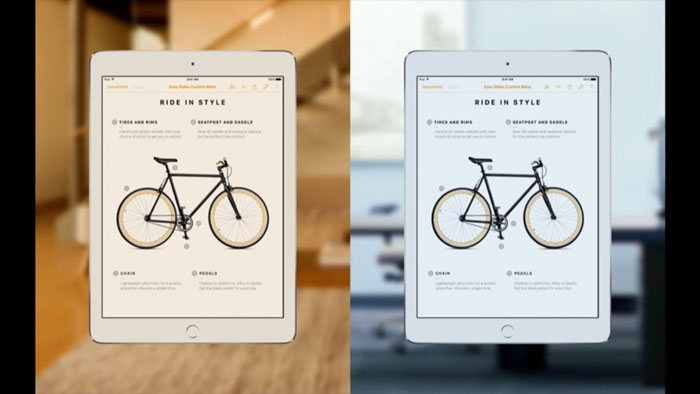 This one seems the hardest to summarise on paper, the fact we haven’t been asked as much about it in-store seems to reflect this, but we think it’s one of the best features of iPad Pro 9.7”. Do you remember ‘The Dress’ that was all the rage on social media a while ago (the one that looked white & gold for some people, and blue & black for others?). Basically our eyes will see the ‘white balance’ of an image differently depending on things like the lighting of the room. This can mean while the screen is always displaying the same image, our eyes will always see it differently depending on what kind of light it’s viewed in.

The new iPad has some clever sensors built in that can tell whether you’re in natural or artificial light, and it will compensate by cooling or warming the image respectively. This means you’re always seeing the colours as the creator intended, whether that’s a photo your friend sent you, a web page, or the latest series on Netflix!

We finally have a camera flash on iPad! We’ve come a long way since the original iPad, which didn’t even have a camera (I know, right..?!), and Apple seem to have recognised that taking pictures is another way that people love to use their iPad. Apple now pack their best camera lenses and True Tone Flash into an iPad that can take pictures in 12 megapixels and take 4K video, which look stunning both on the iPad’s display, printed or displayed on the latest 4K TV’s.

Taking, arranging, editing or importing photos is one of our most covered topics in Personal Training. With the new iPad Pro, photos are going to look stunning with the new camera lens, arranging and editing is going to be quicker and more powerful than ever with the A9X processor, and they’re going to look exactly as you intended wherever you show them off with the True Tone display.

For people wanting all the power and performance of Apple’s flagship iPad in a more portable form factor, the iPad Pro 9.7” ticks all the boxes.