Apple released the MacBook Pro with Touch Bar in October 2016, almost a year ago at the time of writing. The new Touch Bar is a smooth piece of glass that seamlessly fits above the keyboard, where previously the function (f) keys were. The Touch Bar is a new interface innovation for Apple and Mac users were keen to see what developers could create.

We’ve put together a list of 5 applications that will put the Touch Bar to great use.

When Apple first announced the MacBook Pro with Touch Bar, they showed off some applications that would be working with it from day one. One of those apps was Final Cut Pro X. With the release of the 10.3 update, Apple included Touch Bar integration.

The Touch Bar constantly adapts to what you’re doing within compatible applications. This is enormously useful in FCP X. Below are 3 Touch Bar displays that you’ll see during editing, including shortcuts, timeline scrubbing, and text customisation. Other tools will appear automatically during use which may otherwise be hidden such as type, video edit and audio tools.

The Touch Bar is a great tool for everyone, it is an innovative attempt to make using applications easier. That being said, those veteran users of FCP X among you, will know keyboard shortcuts simply by muscle memory, and might find the Touch Bar unnecessary. For beginners however, it may certainly help with learning what is a complex application.

One of the most sought after features from the latest MacBook Pro was Touch ID. With it’s introduction has come applications which can take full advantage of biometric security. 1Password is one of the leading password management tools on the Mac and the latest update includes some great features for the MacBook Pro with Touch Bar.

All of the data secured in your 1Password account is locked and secured by Touch ID. Touch Bar support easily enables you to switch between password vaults (such as passwords for work or domestic passwords), add new entries such as new passwords, identities, bank account information, and credit cards. An application menu also appears, displaying internet accounts that you have setup with it 1Password, so with a tap of your finger you can easily access your favourite accounts. 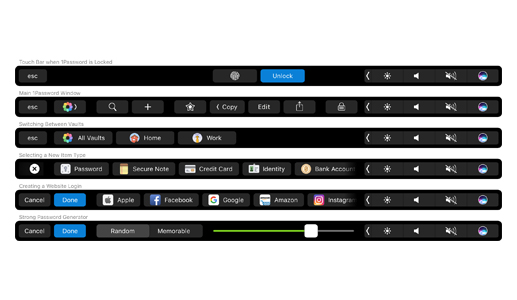 1Password on Touch Bar also gives users an easy way to create passwords within the application, altering the degree of complexity with a simple slider on the Touch Bar interface.

Demo’ed at the launch of the new MacBook Pros, Touch Bar integration on djay Pro introduces a new layer into the already deep level of performance tools but this time using multi-touch and dynamic controls. Users have the ability to scratch and slice a track and simultaneously apply filters and effects in real-time. The Touch Bar integration also allows you to manipulate two decks simultaneously. 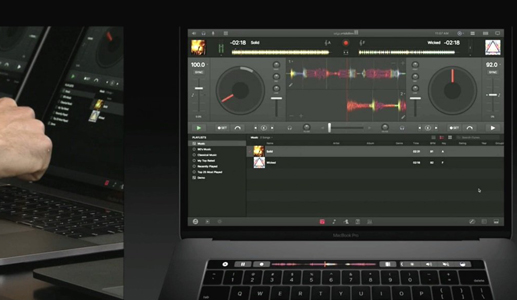 Photoshop is at the forefront of image manipulation and is one of the most well-known pieces of software on the planet. When Apple introduced the new MacBook Pro last October, Adobe were one of the earliest adopters of Touch Bar integration, demoing their new update for Photoshop on stage at the MacBook Pro announcement.

Photoshop brings all the common tools that would normally be in a menu or sub-tool, right to the keyboard in the Touch Bar. Making it easy to work on the Touch Bar as well as the track pad simultaneously. Saving time over mousing between various parts of the interface on screen, by bringing those shortcuts within reach of a users finger-tips instead.

Photoshop on the Touch Bar is available in 3 different modes:

Luminar is an additional photo editing software, which can run standalone app, or as a plugin for applications like Aperture, Lightroom, and Photoshop. Luminar includes over 300 tools, including simple presets to bring a finished and professional look to any photo, for use by photographers of all skill levels. 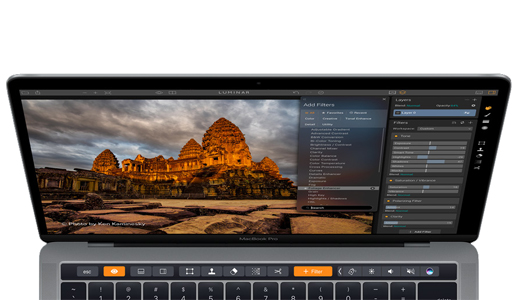 The Touch Bar works with specific features within Luminar, including clone and stamp, noise reduction, crop and transform, and the erase tool. Just like it does in Photoshop, the Touch Bar makes the most commonly used shortcuts used accessible without going into a sub-menu or otherwise mouse-through the software interface on screen.

Drop is a smaller, simpler application compared to the others mentioned above, however it still utilises the Touch Bar in a great way. Designers and developers use colour pickers constantly throughout the day, finding inspiring colours, organising colours for a project, and finding colour values to use in their code. Drop makes this process much more convenient, more accurate, and much faster. Simply by displaying colour values in a simple end easy to use menu.

Of course, its still relatively early days for applications which support the Touch Bar, and this is just a small selection highlighting the increased functionality this new interface can offer. If you are using the Touch Bar with software we haven’t mentioned leave a comment down below, we’d love to hear about it!