Parallels: Best of both worlds

Do you use Apple devices at home, but not at work, school or university? Does your place of work rely on software that doesn’t have a ‘Mac version’? Do you have a number of existing PCs that you manage, and don’t want to have to install a whole new system to manage macOS? These are just some of the reasons we have heard from people who thought they couldn’t use Apple computers at work. They are also obstacles which Parallels overcomes. Let’s look at how.

Many businesses, universities and even schools rely on applications and software which isn’t designed to run on macOS. This often means that staff and students, many of whom have Apple products at home, are forced to use clunky and ageing Windows machines. Perhaps there are a few Mac computers dotted around the place for creative requirements, but generally the main systems are Windows, in order to run just one or two specific applications. What if you could provide a universals platform, giving staff, students and others a system which is more reliable and they are more familiar with, without changing the systems? With Parallels you can!

Parallels is an application that allows you to run Windows and Apple’s macOS at the same time, on an Apple machine. Allowing you to get all the advantages of Apple’s great platform and use the Windows-only applications which are mission-critical for your business.

Switching between Windows and Mac becomes a breeze. In fact, there is no switching. Particularly if you are using ‘Coherence Mode’, which hides Windows entirely and only shows the programs you are using. To you, it looks like the applications are running natively on your Mac, Parallels does all the work in the background! Compare this to Apples native solution, Boot Camp, which requires restarting your computer every time you want to change between the two operating systems. The difference is night-and-day for productivity and convenience!

With the release of Parallels 13, there is a whole host of new features that we consider key for just about anyone.

Touch Bar support! Parallels now has support for Microsoft Outlook, Excel, PowerPoint and more. Including the new Touch Bar Wizard, which allows you to add your favourite Windows applications to your Touch Bar. 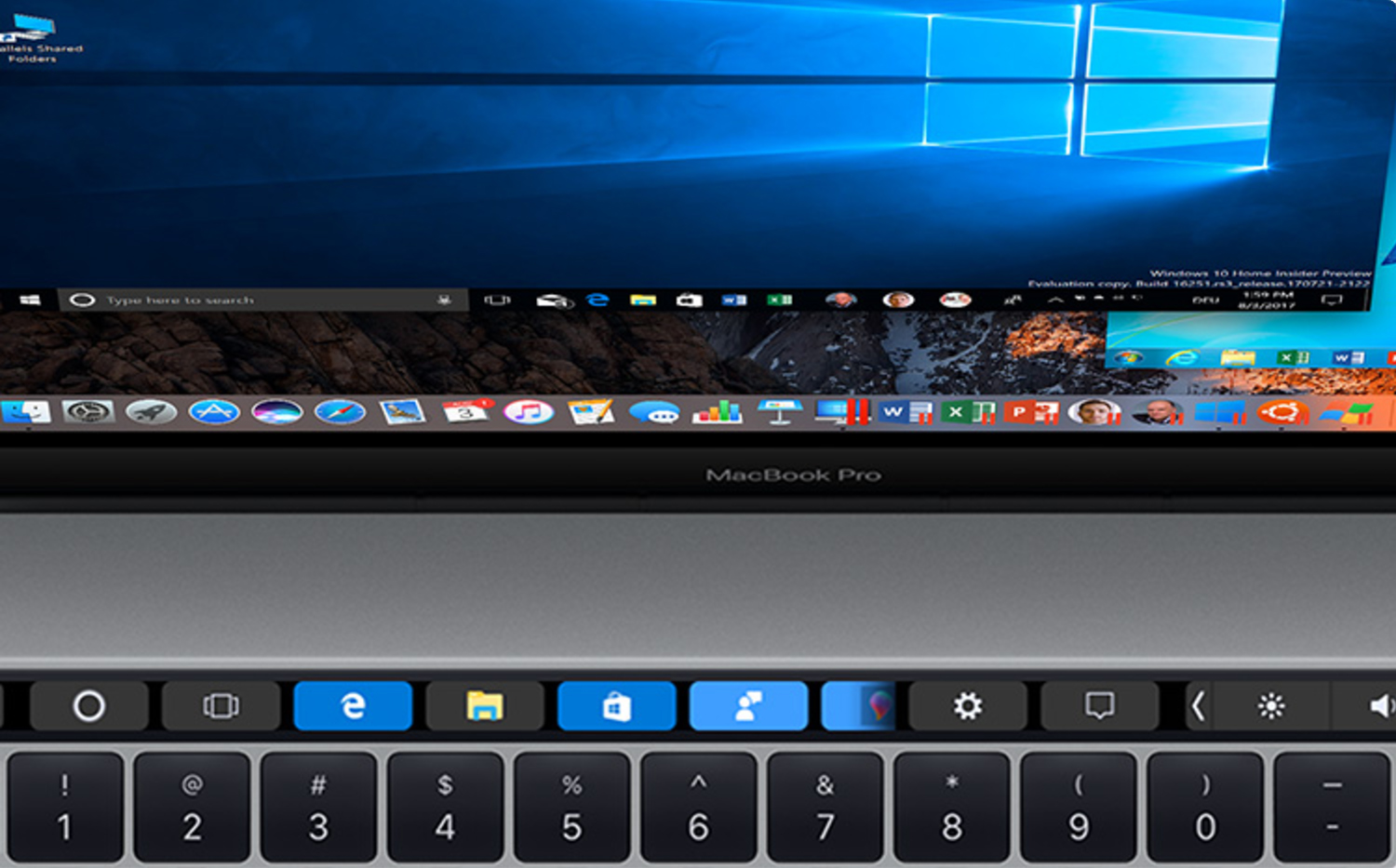 Picture-in-picture mode makes it a breeze to monitor your virtual machines, by seeing them all at once:

Parallels now includes over 30 tools to simplify tasks on both Mac and Windows, including:

Parallels allows integration with Sierra’s optimised storage feature, allowing you to view and control parallels desktop VM storage natively. Since the 2016 release of version 12, Parallels also has the ability to store passwords across windows based applications in the native Mac keychain, which if you’ve read one of our latest articles, you know how vital that can be.

With the introduction of much higher resolution displays in recent years it’s only right that Parallels in-turn updates to reflect the changes. Retina displays are now supported with smart resizing and independent screen resolutions for separate displays.

You can now take a way the pain of updates by scheduling maintenance whenever you like. So the annoyance of updates when you’re getting close to a deadline will no longer be a problem and trust me it will be a welcomed advantage when you’re working.

If you are using Microsoft SCCM to manage a suite of PCs, Parallels Mac Management integrates your Mac computers with it too; allowing you to control macOS without having to run another client management system.

Mac Management integrates with all the features of SCCM: Asset Inventory; Configuration Management and Software Deployment. As well as managing the Windows side of your Mac (through Parallels Desktop Business), it also integrates the management of the macOS side too. With features like macOS Image Deployment, which integrates the deployment of macOS images into SCCM, and an App Self-Service Portal, which allows users to install only approved apps to their work Mac. This will help administrators ensure full compliance and oversight on all devices.

There are many more features of Parallels Desktop for Mac Business Edition, which, combined with Parallels Mac Management, allows you to run, and fully integrate Macs and Windows, in almost any computing environment. You have the freedom to run almost any piece of software, on the best performing hardware and the most secure OS available.

Take a look at the world renowned U.S Medical Center’s journey with Parallels. See how it worked for them and how it can work for you.

If, however, you only require one or two Mac’s to run Windows, then you can easily purchase a copy of Parallels Desktop 13 for Mac. This is a standard boxed version of Parallels and would run Windows perfectly well, with all the key new features mentioned previously. You will have to sacrifice, however, additional features, such as annual subscription (including free upgrades), full 24/7 support, and integration with SCCM.