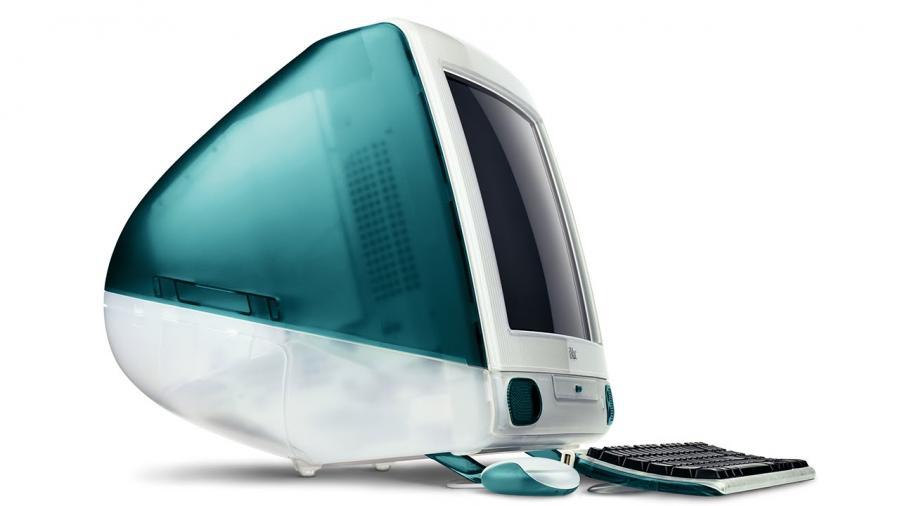 iMac at Twenty : The past and present

It’s twenty years since the release of the original bondi blue iMac – the iconic desktop computer that credited with bringing Apple back from the edge.

Much has changed since. Apple have become a trillion dollar company, the meteoric rise of the iPhone, the internet revolution, and the “internet Mac”, the iMac is still with us. So, how did we get to where we are today.

For those who had been loyal, long-term Mac users up to the iMac launch, seeing the design and the proposed specification was quite a shock. Out went the corporate grey and beige boxes, and goodbye to the conservative design of the Performa and PowerMac ranges of the mid 90’s. It was a move that was to later become a hallmark of Apple, divesting it’s machines of traditional SCSI ports for scanners, so were the unique ADB ports for keyboards and mice. Even the serial ports which Apple had used since the Macintosh was released in 1984 were to be abandoned as Ive and Jobs brought about the birth of the new Mac.

With a translucent all-in-one design – the new shape, with colour coded keyboards and mice, included the CRT display. A new era for Mac’s was brought in with new, fast G3 processors and USB interfaces for connecting to external peripherals. Notably, the day of the 3.5” floppy disk had gone. Apple famously replaced them with a CD drive and never looked back.

Millions were sold as a whole new generation of computer buyers became Apple customers. No longer was the Mac a computer you saw in design departments and corporate print shops, the new iMac was aimed at the ordinary home user. With the democratization of home computing timing perfectly with the rise of the internet and the release of this new line of iMac computers, Apple’s fortunes changed enormously.

Apple continued with the colour revolution over the following three years,. A rainbow of bright, lively iMacs were released. Glorious strawberry reds, tangerines, grapes and limes made the competing Windows PC systems look like industrial relics from another world. 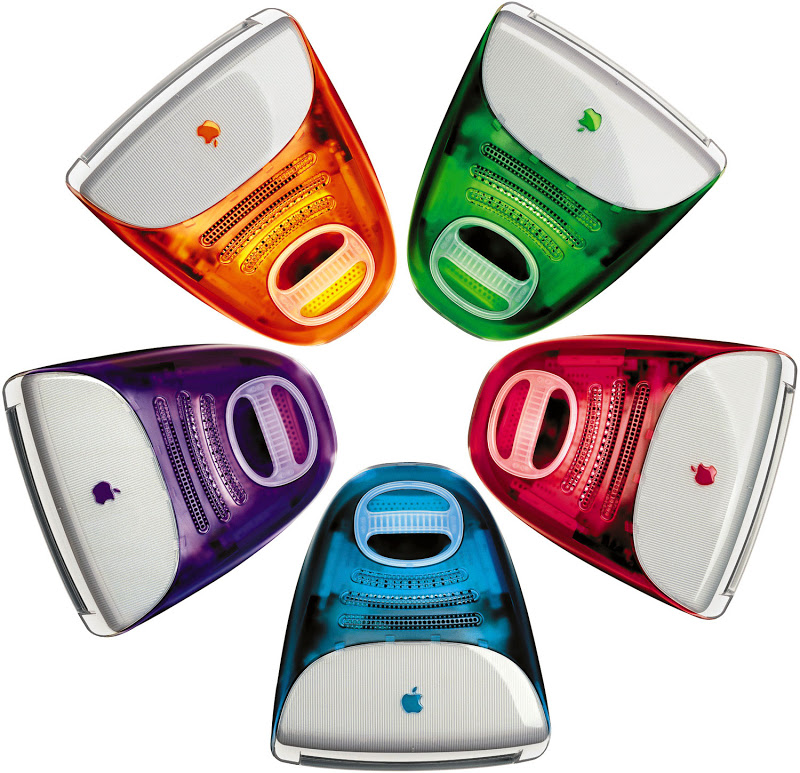 In the early Spring of 2002, Apple revealed another stunning design – Featuring a flat panel 15” display and the newly released G4 processor range. The new iMac G4 design comprised of a dome-shaped system unit, with the LCD panel located on the end of an adjustable, chrome arm. Not too dissimilar to the anglepoise lamp seen in the famous Pixar ‘Luxo’ lamp animation.

With the new design, the technical specification also changed significantly.  Most obviously the bulky cathode ray tube displays were gone, in were LCD panels. WiFi cards were in, dial up 56k modems were going out and USB peripherals had taken over to such a point that users barely even remembered the old Apple interfaces of the 1990’s anymore. 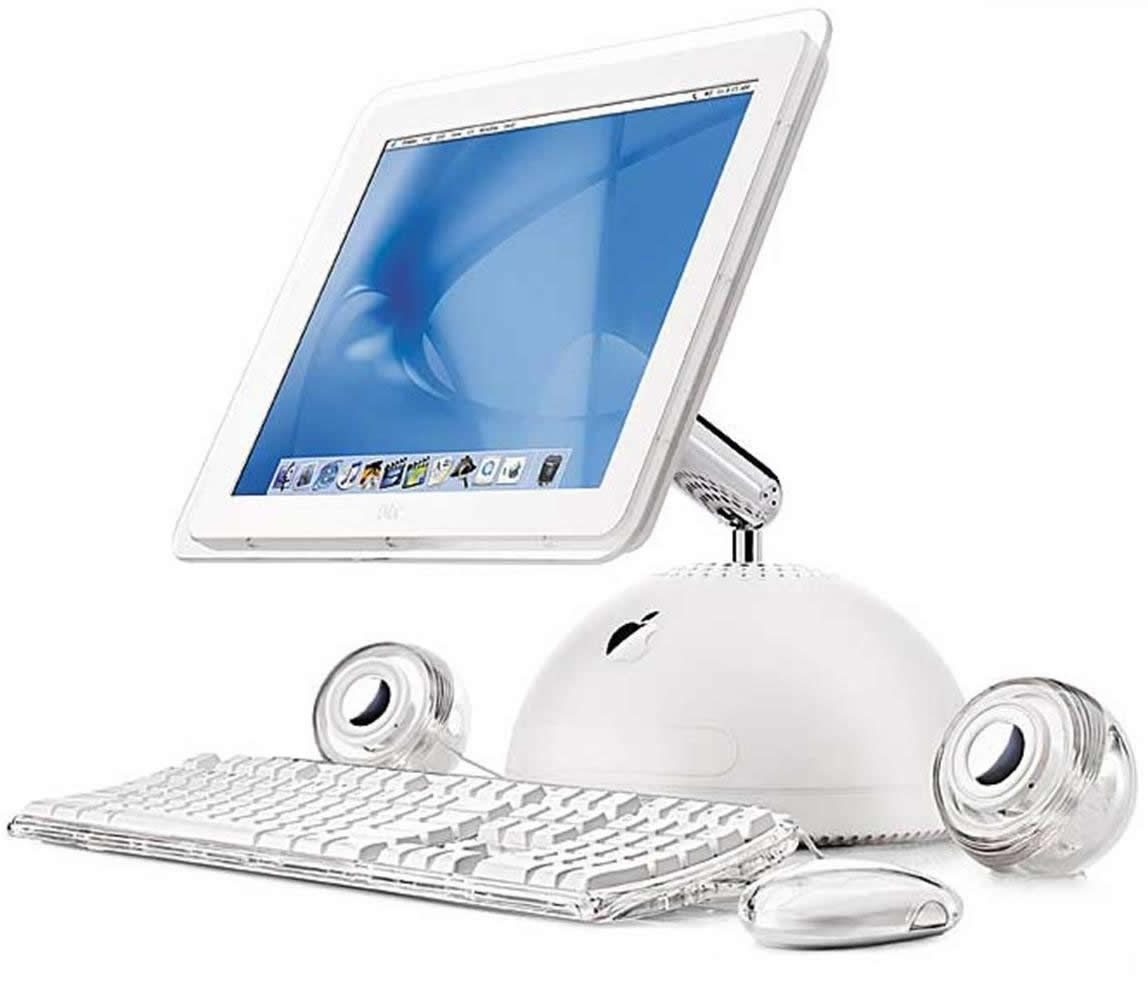 The lifespan of the iMac G4 was, however, relatively short. The Autumn of 2005 saw the introduction of another new iMac design which incorporated the even faster G5 processor, and a design which in various forms, has continued right through until 2013.

Ive’s new design incorporated the internal workings of the computer, the processor, graphics card and the mainboard, to the rear of the LCD display. Encompassing it in an all-white plastic frame in upright form, sitting on an aluminium pedestal. All of its interfaces were now easily accessed on the back, along with a side mounted CD/DVD drive which kept the front face clean, crisp and minimalist. 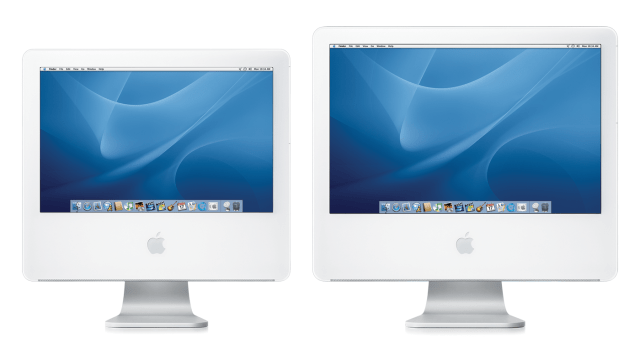 On the inside, another revolution was on it’s way. The G3, G4 and G5 processor line which started with the Power Macintosh range in 1997 was coming to an end and Apple were soon to make the huge jump by ending their use of Motorola processors which had been in every Apple system since the Lisa was launched back in January 1983, and introducing Intel processors.

The technological rivalry between Apple and Windows PC systems had been fierce during the 1990’s with many advertising campaigns playing on the superiority of the IBM/Motorola processors over their Intel competitors. Some saw Apple’s switch to ‘the enemy’ as a backwards move, but with the Rosetta software layer to enable older PowerPC software to work on the newer X86 architecture, the transition was almost seamless.

Screen sizes of the iMac range had grown steadily  since the original 1998 model. Starting with a 15 inch display CRT, the G4 an G5 range went up through to 17 inch and then 20 inch displays. The move to the Intel processor range in 2006 was accompanied by a move to screen sizes of up to 24 inches. Due to improvements in the speed and availability of high speed internet, the era of live video conferencing was here, and Apple’s ‘FaceTime’ became a huge hit due to the inclusion of a discreet iSight camera, built right in to the case design.

Apple’s design developed during the mid-2000’s, from the use of white plastics to a more industrial aluminium construction. The iMac was now ten years old and in that decade, the rate of change was staggering. Processor performance had multiplied by more than ten times, and the standard memory configuration had risen by a factor of over thirty, from 32MB in the original iMac, to 1GB of RAM being a common starting point in 2008.

The iMac’s second decade has seen a more gradual journey than the frequent design and form changes seen in its first ten years. Apple focused on slimming the silhouette of the all-in-one machine by reducing the depth in 2013 to a miniscule 5mm at the edges, giving it its current streamlined look. In another major change, the CD and DVD drive as a standard feature had gone. Apple continued it’s strategy established by Jobs, to get rid of hardware Apple deemed to be out-moded.

The largest iMac now feature  27 inch 5K displays. Such large displays were introduced in October 2009, and quickly became the product of choice for those who needed the highest possible resolution (an at the time, staggering 2560 x 1440 pixels). Ideal for those who worked all day in Photoshop and Adobe’s Creative Suite apps or video production environments where resolution is everything. It took five more years for the ultimate iMac display to be released, with a Retina display being offered, with a class-leading 5120 x 2880 pixel resolution.

Apple’s latest iMac, released in December 2017, pushed the performance boundaries far beyond any desktop computer Apple have ever produced.  The Mac Pro range has lagged in terms of performance in recent times (although there is slated to be a new model in 2019 [link to Mac Pro ‘roundtable’]), the new iMac Pro’s performance almost doubles even the fastest model produced in that range. Apple has never been afraid to cannibalise it’s own sales and with the iMac Pro managing to maintain the sleek and slender good-looks of the iMac, it has given creative professionals another option whilst the new Mac Pro is in development. With a great deal of customization available on the iMac Pro, some models can reach in excess of £12,000 if fitted with the super-quick, 18-core Xeon processors– an option which offers power which is just over 250x greater than that of the original iMac.

Now, twenty years on from its original launch, we’ve seen many design changes, new connection standards introduced and fall away, new features and technologies arrive which have since become the norm. What will the next twenty years of iMac bring?